Julie Cheyney makes a raw-milk lactic cow’s milk cheese called St Jude in Hampshire, UK. Before starting to make St Jude, Julie was on the team that developed Tunworth, a Camembert-style cheese that won Supreme Champion at the British Cheese Awards in 2006. We spoke with her about making raw milk cheese and the microbes that play a role in the process.

How does your work bring you into contact with microbes?

Microbes, be they yeasts or bacteria, are fundamental to cheese making and this is an area which I find particularly fascinating within my work of making cheese from raw milk. The influence of microbes upon my finished cheeses cannot be overstressed; they are a major reason why my cheese is how it is. They enter my cheese by piggy-backing on the milk from the dairy farm and in my cheese room, and of course I add microbes in the form of commercial starter cultures.

Where do you source the starters that you use for your cheese? How do you maintain a unique identity for your cheese given that you are adding commercial strains of starter and ripening bacteria? 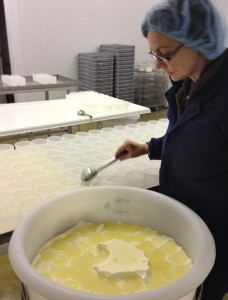 At present I buy starters from France although in the future I aim to experiment by making my own starter from the raw cow’s milk that I make the cheese from. My cultures are not used at the manufacturer’s recommended strength but diluted. I may only use between a quarter to a half of the dose of the various cultures for my recipe, which also alters according to the season and stage of lactation of the cows. This way I hope that the milk still shows its own identity and is not smothered by the commercial strains of microbes. Microbes can be selected to impart certain flavours in cheese but not only that, if they are handled correctly they can also help create particular environments in and around the cheese, which help prevent spoilage or tastes that I don’t want, and encourage those that I do.

Tell us about the lactofermentation test that you do on your raw milk. What sort of information does it give you?

Each time that I make cheese, I put aside two test tubes of milk for a lactofermentation test. One tube is just the plain raw milk with the top loosely covered with kitchen paper and in the second add a small drop of rennet and seal the top of the tube with clingfilm. This is my very basic laboratory! These tubes sit in my cheeseroom which is usually kept about 22 degrees C. Of course one can use water baths etc., but this system works for me and after all I use it to compare like with like within my form of test. Lactofermentation gives me an idea of what is going on within the milk and flags up anything worrying to be studied further by my microbiological [contract] lab, by showing bubbles of gas in the set milk or an awful smell on opening up the cling film.

You are about to start working with a different milk source. How do you envision that it will change your cheese? 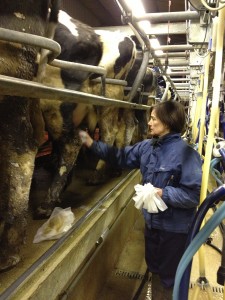 Preparing cows for milking in Hampshire

St Jude is about to be made from different milk. I have always been aware that I am making cheese from milk destined for drinking but in a few months it will be made from milk where the cows have been bred and fed for cheesemaking. This is very exciting, as I will be closing in on my goal of knowing as much about my raw materials as possible. Whilst I use milk from grass fed cows now, with this new herd I will, for example, know the diverse mix of swards within their pasture, which means more diverse flavours for the cow, the milk and hopefully the cheese. This is just one area of the whole picture that will make St Jude different and it will be interesting to see how the new microbes in this environment translate. The first two trial batches have shown me so much already and are most encouraging.

What is your favorite microbe?

My favorite microbe that I use is Geotrichum candidum, not only for its actions and flavours upon the milk but also its trait of forming a protective coat around the cheese. I would really like to learn more about this particular microbe and how it works on my cheese through the seasons. I am especially hopeful that I will no longer buy it in, but nurture that which is naturally occurring in the milk and environment on the new farm.

Leave a Reply to May Cancel reply