By Megan Biango-Daniels with editing assistance from Megan Martin

Many cheesemakers credit strains of microbes that are specific to their caves with providing terroir, flavors, or appearances that cannot be replicated. This so-called microbial terroir is the unique taste imparted by microbes that make these foods. But what are microbial strains and how do they differ from species? More importantly, why do scientists and cheesemakers care about small differences in the microscopic organisms found in environments?

The science behind strains vs. species

Consider Penicillium roqueforti (hereafter P. roqueforti), the species of mold that gives blue-veined cheese its characteristic blue, and Penicillium expansum (hereafter P. expansum), a different species that causes blue rot on apples. At first glance, both of these blue-green fluffy molds look similar. These closely related molds are both members of the Penicillium group of molds, made famous by the species which makes the antibiotic penicillin. But to a trained mycologist, someone who studies fungi, they are about as similar as wild jackals (Canis aureus) and domestic dogs (Canus familiarus).

Although wild dogs and Golden Retrievers are both canines, only one of these has been domesticated and will make a good pet. The two Penicillium species,  P. roqueforti and P. expansum, are just as different and distantly related, but their microscopic differences make it hard at a glance to tell them apart. They come from different environments and behave very differently— one is used to make delicious cheese, and the other often rot apples during storage and can make toxins.

Compared to species, strains are much more closely related to each other. In fact, strains are genetically different members of the same species, with varying characteristics, like color or growth. An example of this can be seen in Geotrichum candidum (hereafter G. candidum), a beneficial white fungus found in many kinds of cheese, from Camembert to Reblochon. Although these cheeses are made in very different ways and in different places, both are colonized by G. candidum (Marceillino et al. 2001). The reason is that the different strains of this species lead to different characteristics in cheese. Geotrichum candidum is so diverse that different strains can be found within the same cheesemaking facility. 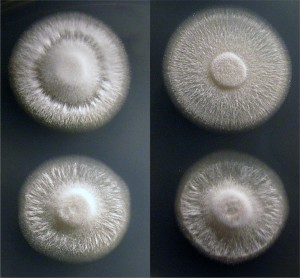 Geotrichum candidum colonies can be fluffy and mold-like (Left), or flat and yeast-like (Right). Images by Benjamin Wolfe.

Think about strains like different breeds of dogs. They are all the same species, Canis familiaris, but there are dramatic differences between them. Just look at the long bodies and short stature of Dachshunds, which were selected by humans to flush our burrowing animals. While Labrador Retrievers, tall with their powerful legs, thick coats, and webbed toes, were bred to retrieve waterfowl. Just like dog breeds, strains of microbes are members of the same species with important differences. A microbe’s traits match their environment and what they were bred to do as well. Some strains of G. candidum are flat and yeast-like, while others produce a lot of fluffy, mold-like spores.

These two strains of G. candidum don’t just look different, they have evolved to suit particular stages of cheese making by producing different enzymes and growing best in different environments. Cheesemakers through the ages have indirectly selected for specific traits in the microbes in their cheese. While it’s not as clear as breeding for Labrador Retrievers that have webbed toes to swim better, the process of making different cheeses can select for certain traits in microbes. Consider washed rind cheeses, that are repeatedly bathed with salt brine. This wash eliminates many microbes that can’t live in high salt environments but other microbes which can tolerate salt survive. These microbes may be a salt-loving species, perhaps introduced from the salt itself, or they may be strains already present that are better at living with high salt. These strains may simply outcompete and survive their salt-sensitive relatives.

Why do cheesemakers care about strains?

Dog breeds like Labrador Retrievers (Top) and Dachshunds (Bottom) can be thought of as two strains of the same species. Images from the American Kennel Club.

‘Variety is the spice of life’ and there is increasing interest in harnessing different strains of bacteria, yeast, and mold to craft unique flavors in cheese. Cheesemakers care about strain differences because individual differences in microbes can change the characteristics of the foods they ferment.

The use of different strains is one of the reasons that two of the same style cheese, both made in the same region, can have different flavors and appearances. The flip side to the diversity among strains is that naturally occurring microbes may not have all the characteristics that a cheesemaker is looking for. Perhaps the strains of G. candidum in your cheese cave are the yeast-like type, and you need the fluffy one to achieve the rinds that you’re looking for. This is why many cheesemakers purchase starter cultures, which guarantee specific quality consistently, and why some people always get Labrador Retrievers for pets.

Scientists are trying to understand these so-called intraspecific differences among strains. As starter cultures become ubiquitous the diversity within species in these cheese caves may vanish. Some worry what will be lost are the unique strains that are found only in specific places because that’s where strains evolved and were shaped by a specific history of cheese making.

The future of cheese-microbe strain diversity

There is a lot left to learn about how different microbial species and strain-level differences influence the taste and appearance of fermented foods like cheese. Scientists have yet to fully characterize all the strains of microbes present in cheeses and other fermented foods. New genomic sequencing approaches, developed as part of the human genome sequencing project, are cheaper and easier. They should allow the full strain-level diversity of microbes to be revealed over the next decade.

The diversity of microbe strains in these environments may be an untapped source that could be important for innovation and creating exciting new flavors in cheese and other fermented foods. As strains are fully characterized and scientists begin to understand traits that make them valuable in fermented foods it may be possible to evolve stains with specific flavors, aromas, and other desirable traits. Instead of relying on accidental domestication, scientists will be able to experimentally domesticate microbes, coaxing them to evolve by growing them repeatedly under specific conditions. This might sound like science fiction but it’s no different than what humans have been doing for thousands of years when they breed dogs.