In the most comprehensive study of kombucha microbial diversity to date, a team of scientists recently uncovered new microbial dimensions of this popular fermented tea. In this Science Digested, I provide a summary of what you need to know from this exciting new work and how it may change our understanding of how kombucha is produced.

Kombucha is fermented tea. To make kombucha, tea is brewed, sugar is added to the tea, and then a microbial community is added to the tea. This community is usually a giant slimy blob that goes by many names: mother, SCOBY (for symbiotic community of bacteria and yeast), and pellicle. I think pellicle is the most scientific, so I’ll use that throughout the rest of this piece. This microbial community is a perfect example of a microbial biofilm, a dense microbial mat fused together by substances that the microbes secrete. In this case, it’s cellulose that is produced by the bacteria that is primarily responsible for the glued together community. 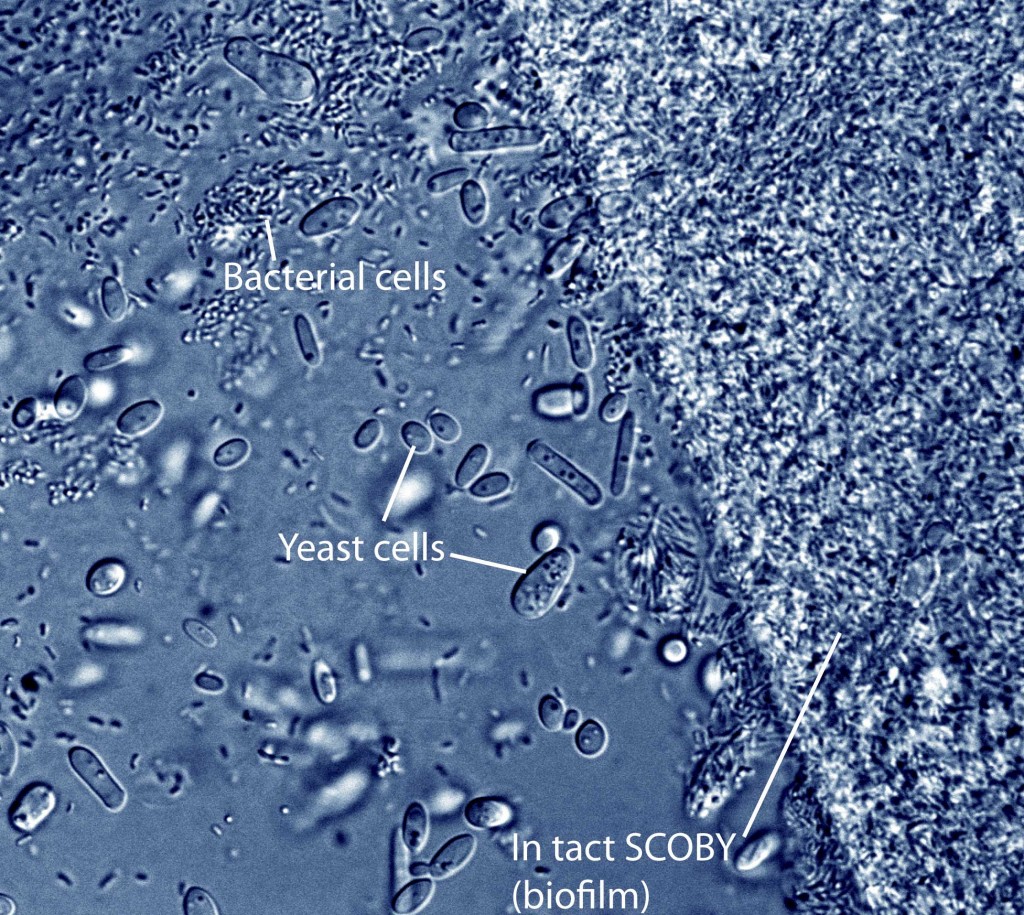 A pellicle (more commonly called SCOBY or mother) of kombucha under the microscope. This 400X magnification shows both the larger yeast cells as well the smaller bacterial cells that coexist in a typical kombucha microbial community. Photo by Benjamin Wolfe.

Yeasts living in the biofilm use the sugars in the tea to produce alcohol. This alcohol is then consumed by neighboring bacteria to produce acetic acid (vinegar). The resulting kombucha tea is an earthy and slightly sweet (depending on the length of fermentation) beverage with hints of vinegar. When bottled and stored, carbon dioxide is trapped making the kombucha bubbly. Some find kombucha to be refreshing and delightful. Others run away in fear and disgust (to be fair, it’s one of the ugliest fermented foods I’ve ever seen!).

Previous studies had identified the yeasts and bacteria present in a few kombucha SCOBYs. Most of these studies just focused on one kombucha tea made in one place. But kombucha is now made around the world. Kombucha brewers pass their pellicle from one location to the next to help friends inoculate new batches. How have the microbial communities changed as people have passed them along? Do the kombucha microbial communities in one part of the world look similar to another? By sampling kombucha communities made in several different regions (the UK, Ireland, Canada, and the United States) this new paper by Alan Marsh and colleagues attempts to broadly define the typical community within kombucha.

The microbiologists in this paper were the first to use high-throughput (sometimes called next-generation) DNA sequencing techniques to analyze kombucha microbial diversity. This type of DNA sequencing approach allows for rare types of microbes that might be missed with other techniques that can’t sample as ‘deeply.’  Another important aspect of this paper is that the scientists studied both the bacteria and the fungi (yeasts in this case). Often these two microbial groups are studied separately and therefore the view of microbial diversity becomes disconnected. Finally, the study examined the microbial diversity of both the solid mass of the pellicle, but also the microbes in the liquid tea to see how the two environments compared.

Several important findings from this work refine our understanding of kombucha microbiology. First, the bacterial component of the community was dominated by two bacterial genera, Acetobacter and Gluconacetobacter. These are both genera of bacteria that can produce acetic acid and are responsible for the vinegar flavor that comes through in a lot of kombuchas. Previous studies had considered Acetobacter to dominate kombucha communities, but Gluconacetobacter was most abundant in this paper. Interestingly, the authors suggest that some of the most abundant types of Gluconacetobacter could be poorly characterized strains. The authors are careful to note that changes in bacterial taxonomy are shaking up our classification of Acetobacter and Gluconacetobacter, and these changes may account for how their results contrast with previous studies.

One surprisingly finding from the bacterial portion of this study was the large abundance of lactic acid bacteria in some of the kombucha pellicles. Generally, these bacteria, which are more abundant in lactic fermented foods such as yogurt, cheese, and salame, are rarely detected in kombucha. Lactic acid bacteria were most abundant in the pellicle from Ireland, making up over 30% of the bacterial community. Previous studies may have missed these bacteria because they require specific types of media not normally used in studies of kombucha microbial diversity.

In the fungal part of these microbial communities, one type of yeast, Zygosaccharomyces, dominated both the pellicle and liquid of the kombucha. In almost all samples, it made up greater than 90% of the community composition. This wasn’t a huge surprise because previous studies had also observed dominance by Zygosaccharomyces in other samples.

What might this new research mean for the production of kombucha? The finding of lactic acid bacteria at high abundance suggests a potentially under-appreciated component of kombucha microbiology. What are these lactic acid bacteria contributing to the fermentation? Are their impacts desirable? Why are they present in some samples and not others? The finding that not all komnucha samples are the same also suggests that each producer, whether a home or professional fermenter, can develop unique microbial communities. Future work can experimentally tease apart why these unique communities develop and how the differences in microbial composition translate to differences in kombucha flavors.

For more details on this study, please check out the full article here:

There are 41 comments on this article