Reinventing the Wheel: Milk, Microbes, and the Fight for Real Cheese is a book that, like MicrobialFoods.org itself, was directly inspired by time spent collaborating with Benjamin Wolfe at the Dutton Lab in early 2014. Returning to London with a new appreciation for the power of microbial communities in shaping the flavors of the food that we eat, I was eager to start a conversation within the cheese industry. I wanted to see more cheesemakers enhance the flavor of their cheeses by encouraging healthy microbial communities native to their farms to play an active role in the cheesemaking process. It was also clear that without a concurrent conversation amongst those who enjoy eating cheese, it would be impossible to translate that work into any sort of tangible reward for those hard-working farmers. My husband, Francis, who writes about food and wine, suggested that a book might be the best way for us to start that conversation.

Now, almost four years later, Reinventing the Wheel has just been published by University of California Press in North America, and by Bloomsbury in the rest of the world. It has also been inspired by MicrobialFoods.org in the sense that it sets out to communicate some sophisticated ideas in a way that makes them engaging. 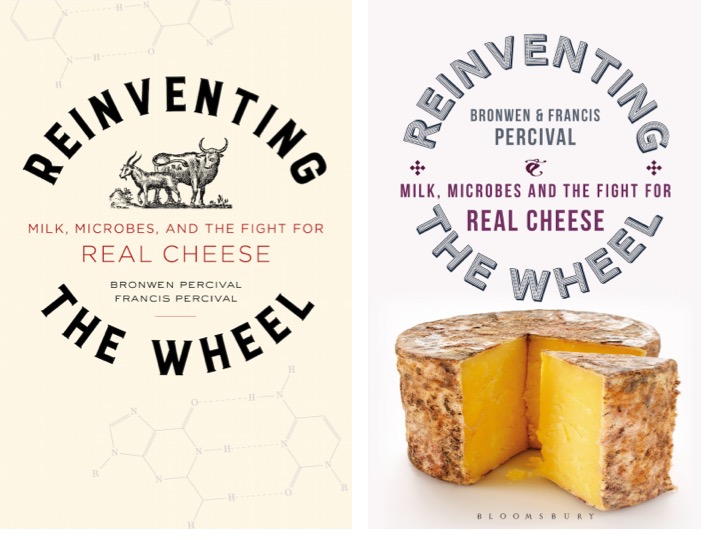 The US and UK editions of Reinventing the Wheel

At the heart of the book is a microbial story: scientists, farmers, and cheesemakers working to understand the role that indigenous microbes play in the flavour of farmhouse cheese. And just as in Benjamin Wolfe and Rachel Dutton’s work, cheese is a microcosm that illustrates broader themes about the way microbes work together and the role that they play in the world around us. We explore research that links elementary farming decisions–like what kind of bedding is used for the animals–with the resulting shifts in microbial balance in the milk, and the effects these have on cheese flavor. We also discuss the hows and whys of fermentation management in cheesemaking, including the history and origins of lactic acid bacterial starter cultures in food processing–and how the story of cheese might serve as a parable for other foods. Finally, we look at the perception and management of risk: how our understanding of pathogens is being reshaped and the best strategies to heal the fractured relationship between practitioners and regulators.

“Reinventing the Wheel is a rich and eye-opening insider’s account of the modern cheese world: the anonymous uniformity underlying the apparent bounty of the cheese counter, the near extinction of truly exceptional cheeses, and the new scientific appreciation of prescientific cheesemaking, with its canny reliance on biodiversity in pastures and cattle and the dairy, which may help bring more distinctive and flavorful cheeses to tomorrow’s table.”—Harold McGee

“This is a book about cheese ecology that delves deep into the importance of context and explores each of the myriad factors that determine different outcomes in cheese. Be ready for a broad education in the history and science of breeding, feeding, and handling milking herds, along with the evolution of cheesemaking processes, approaches to microbe management, and much more. Milk and cheese are demystified and explained, with far-ranging discussions of great interest to anyone with an insatiable curiosity about cheese, or food production more broadly.”—Sandor Ellix Katz, author of Wild Fermentation and The Art of Fermentation

“A brilliant consideration of microbial ecology, the science that is causing a refresh of our view of everything from human health to the health of cows and farmers in the dairy industry.”—Wine and Spirits Magazine [2017 Book of the Year]

You can read the first chapter on the US publisher’s web site, and Steven Jenkins’ wrote a very thorough review in the Wall Street Journal.

For another taste of the content, you can read a short piece we wrote on the microbial terroir of l’Etivaz for Serious Eats, or listen to this episode of the BBC Food Programme on Cheddar.