When you buy an aged cheese at the store, you expect it to have a specific appearance. Camembert should be white and fuzzy. Limburger should be orange and sticky. Cheese makers work hard to manage aesthetics, but sometimes unplanned colors or textures cause cheese defects. In the past few years, cheese rinds around the world have started turning an unusual purple color. In this Science Digested, I’ll explain how my lab discovered the microbial cause of this purple rind defect.

In 2015, we received a call from a cheese maker in the United States. They had been making a washed-rind cheese using raw cow milk. Washed-rind cheeses normally have an orange appearance due to the growth of specific ripening microbes that produce yellow, orange, and red pigments. But all wheels of cheese across multiple batches were turning an intense purple color (see photo below). We named this phenomenon purple rind defect.

The left photo shows multiple wheels of cheese with purple rind defect. The orange wheel in the front is most similar in color to a typical washed-rind cheese. The photo on the right shows one section of a wheel heavily impacted by the defect. Photos by Benjamin Wolfe.

This cheese defect was a surprise to both the cheese maker and to me. I called many cheese makers and microbiologists, and none of them had observed purple rind defect before. Purple is not a very common pigment in the microbial world. There are some specific groups of bacteria, including the purple sulfur and purple non-sulfur bacteria that can appear purple. The bacterium Chromobacterium violaceum is also purple. But neither of these groups of bacteria grow on cheese.

When we plated out the cheese in the lab, we noticed that purple sections of the cheese had a high abundance of the bacterium Proteus (see images of Petri dishes below). After exploring previously published research, we quickly realized that Proteus may be the culprit. Proteus species are sometimes associated with a striking medical phenomenon known as purple urine bag syndrome. When hospitalized patients with urine bags get a urinary tract infection with Proteus or another species of Gammaproteobacteria, the bacteria can convert the amino acid tryptophan into the pigments indigo and indirubin. Indigo is the blue dye used to add color to blue jeans and other fabrics. Indirubin is a pigment with a similar chemical structure, but is more red in color. The mix of blue indigo and red indirubin leads to purple pigmentation.

Experimental cheese rind communities demonstrated that Proteus can cause purple rind defect. On the left shows the color of the control cheese community with a typical bacterial composition. On the right shows purple pigment production when Proteus was added to experiment cheese communities. Photos by Benjamin Wolfe. 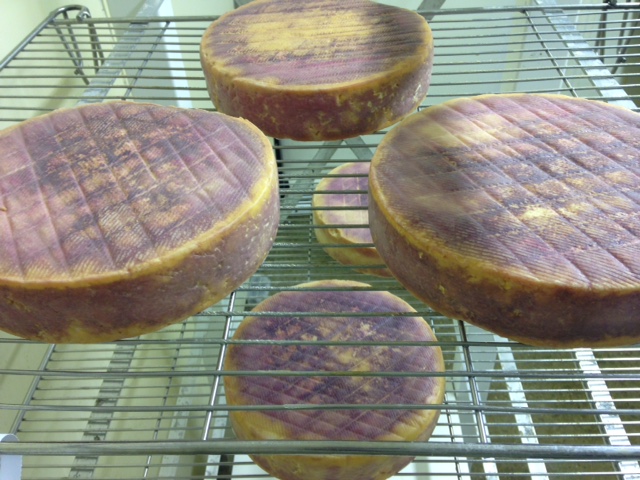 A washed-rind cheese in the UK with signs of purple rind defect. Photo by Bronwen Percival.

What can cheese makers do to manage purple rind defect? Our research did not specifically address this, but we do make several suggestions for potential management strategies. We found high amounts of Proteus in raw cow milk used in the production of this cheese suggesting that herd hygiene and milk quality management can help control purple rind defect. The addition of starter cultures that might outcompete Proteus may also provide a reduction in purple pigment production. Proteus, Psychrobacter, and other Gammaproteobacteria that live on cheese rinds like high moisture conditions. Working to dry out the rind surface may also help reduce purple rind defect.

Have you observed purple rind defect before? Have you developed successful management approaches for this defect? Tell us about your experiences in the comments section below.

For more details on the study, please see Kamelamela, Noelani, et al. “Indigo- and indirubin-producing strains of Proteus and Psychrobacter are associated with purple rind defect in a surface-ripened cheese.” Food Microbiology 76:543-552.

There are 13 comments on this article