Can good viruses keep bad bacteria out of fermented foods?

Food scientists have developed a diverse toolkit to help food producers keep pathogens out of fermented foods, including pasteurization, raw ingredient and end-product testing, and the addition of natural preservatives. Over the past decade, a new technology using viruses that attack pathogenic bacteria (bacteriophages), has emerged on the market as a potential addition to this food safety toolkit. Here we explain the science of using good viruses to kill bad bacteria in fermented foods.

END_OF_DOCUMENT_TOKEN_TO_BE_REPLACED

Dissecting the Microbial Diversity of Kefir

Kefir is a thick, sour, and sometimes slightly spritzy fermented milk drink produced through the action of the bacteria and fungi within kefir ‘grains’, a classic example of a SCOBY (Symbiotic Community of Bacteria and Yeasts). Despite a history that dates back several millennia, kefir and the microbes that produce it remain little-understood. Two recent papers from China and Ireland set out to explore the microbial diversity of kefir samples collected from a wide geographical area. One also provides insight into the physical structure of the kefir grain, and the distribution of yeast and bacteria across it. END_OF_DOCUMENT_TOKEN_TO_BE_REPLACED

From biofuels to fish food to gold nanoparticles, Yarrowia lipolytica is all the rage these days as a powerful workhorse for biotechnology. But this yeast also has important roles in the flavor development and appearance of some traditional fermented foods. Here’s all you need to know about this versatile and beautiful yeast. END_OF_DOCUMENT_TOKEN_TO_BE_REPLACED 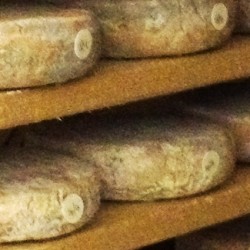 Wooden boards are widely used for aging cheese in Europe and America. While their use has an established track record for utility and safety, it has also been the subject of debate. Food safety regulations on both sides of the Atlantic require food contact surfaces to be sanitizable, and wooden boards are rough and porous, and therefore difficult to disinfect. [click to view the full story]

In 2012, a consortium of French scientists published a practical guide to raw milk microbiology aimed at farmhouse cheesemakers interested in fostering the natural microbial diversity of their milk. They show that healthy and stable microbial communities contribute to cheese safety (as evidenced by some of the research into the microbial biofilms on wooden boards used for aging Reblochon), and are also crucial to cheese flavour.  END_OF_DOCUMENT_TOKEN_TO_BE_REPLACED

What happens when you collect 137 cheeses from around the world and sequence their DNA? You end up eating a ton of cheese. But more importantly, you learn a lot about what bacteria and fungi live in a typical cheese rind, that sea salt may be a previously unrecognized source of cheese microbes, and whether the notion of ‘microbial terroir’ holds up in artisan cheeses. In this Science Digested, I provide a digested version of recent research that used new DNA-sequencing approaches to broadly survey the microbial diversity of artisan cheese rinds.

END_OF_DOCUMENT_TOKEN_TO_BE_REPLACED

If you’ve ever spotted bright orange patches on the rind of a cheese, there’s a good chance it was Sporendonema casei. While orange may instill a sense a fear, this orange mold isn’t out to get you. It’s a benign mold species that contributes unique aesthetics and flavors in cheese rind ecosystems. [click to view the full story]

Brennan et al., Appl. Environ. Microbiol. 2002, 68(2): 820-830. What organisms grow on the surface of a semi-soft, pasteurized washed rind cheese during the course of its development? How does inoculation with a commercial strain of Brevibacterium linens affect the development of the rind microbial community? This paper sheds some light on these very pertinent questions.  END_OF_DOCUMENT_TOKEN_TO_BE_REPLACED

Julie Cheyney makes a raw-milk lactic cow’s milk cheese called St Jude in Hampshire, UK. Before starting to make St Jude, Julie was on the team that developed Tunworth, a Camembert-style cheese that won Supreme Champion at the British Cheese Awards in 2006. We spoke with her about making raw milk cheese and the microbes that play a role in the process.
&nbsp [click to view the full story]