When it comes to giving credit for those pungent orange rinds, most people cite the bacterium B. linens (formally Brevibacterium linens). But recent research suggests that B. linens may be getting way too much credit for cheese rind color. Numerous other bacteria and fungi can create distinct pigments on the rinds of cheeses.

My own experience isolating microbes from cheese rinds and other published research suggests that some highly pigmented rinds have very little B. linens present. For example, in a washed rind cheese from California with a typical orange colored surface, we didn’t detect Brevibacterium. Most of the bacteria we found weren’t even added to the cheese as a starter culture, but probably came from the sea salt used in the brines for the cheese.

The surface of a washed rind cheese (left) from California has a typical orange color. But orange colonies of Brevibacterium linens (commonly called “B. linens”) are nowhere to be found when we look at the microbes that live in the rind (right). These are Proteobacteria, which are light brown, clear or tan in color. This observation and other recent research suggest there are many more microbes out there that give washed rinds their characteristic pigments. Left photo by Adam Detour, right photo by Benjamin Wolfe.

So if Brevibacterium isn’t always responsible for washed rind color, what microbes are? Here’s an overview of some of the lesser known pigment producers:

Fusarium domesticum, known in the starter culture world as Mycodore and previously known as Trichothecium domesticum, is a mold commonly added to washed rind cheeses. When grow in the lab in a cheese-like medium, it produces orange pigments on the cheese surface. Eventually the mold surface is covered in short white fuzz. The specific compound responsible for orange coloration of this mold has not yet been identified, but Fusarium species can produce carotenoid compounds similar to those produced by Brevibacterium. Many washed rind cheeses have this mold growing on their surface and likely get some of their color from Fusarium.

Rhodosporidium, known in the starter culture world as R2R, is a red yeast that is also commonly added to washed rind cheeses. This yeast is incredibly slow-growing and is sometimes hard to get to establish on rinds. When it does grow it makes beautifully pink washed rinds. The yeast is pink in color because it produces a type of carotenoid. 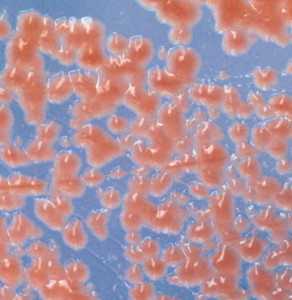 Colonies of the red yeast Rhodosporidium growing in the lab. This pink yeast contributes reddish-pink pigments to the surfaces of washed rind cheeses. Photo by Benjamin Wolfe.

A colony of Brevibacterium linens growing next to Staphylococcus xylosus. Some Staphylococcus species can produce orange pigments that give washed rinds their characteristic color. Photo by Benjamin Wolfe.

Bacterial-fungal interactions, and not the microbes themselves, can result in pigmentation on cheese rinds. One example of microbial interactions producing pigments comes from when the bacterium Arthrobacter interacts with a mold, such as Fusarium, Penicillium, or Scopulariopsis. In our large survey of rind microbiology, we found that when grown alone, Penicillium and Arthobacter don’t produce pigments. But when we grow the two microbes together, they form a pink pigment that is secreted into the cheese curd.

When the bacterium Arthrobacter (top) or the fungus Penicillium (bottom) are grown alone, no pigments are produced. When they are mixed together, Arthrobacter secretes a pink compound.

We still don’t know what these pigments are or why the microbes produce them, but it’s likely that some of the pink colorations that form on ripening cheese rinds result from similar bacterial-fungal interactions.

We can’t completely ignore Brevibacterium when talking about rind pigments. It is definitely a widespread bacterium that can be found on the rinds of many cheeses. Cheesemakers can purchase Brevibacterium as a culture to be added to their cheese, but it’s also commonly found in raw milk and can be part of raw milk cheese rinds.

So the next time someone tells you it’s all about the B. linens, tell them there’s more to that orange cheese rind than they may think.

There are 8 comments on this article